ESSAYS ON ISSUES THE FEDERAL RESERVE BANK DECEMBER 2013 OF CHICAGO NUMBER 317 Chicago Fed Letter Bitcoin: A primer by François R. Velde, senior economist Bitcoin is a digital currency that was launched in 2009, and it has attracted much attention recently. This article reviews the mechanics of the currency and offers some thoughts on its characteristics. In this Chicago Fed Letter, I explain the digital currency called bitcoin. The cur- rent number of bitcoin units is around 11.8 million; and, unlike physical coins, they are divisible to the eighth decimal place. Bitcoins are traded on various online exchanges for other currencies. At the time of this writing, the average worth of a bitcoin over the previous six months had been a little over $100. Thus, the total balances held in the form of bitcoins stood at around $1 billion, compared with $1,200 bil- lion circulating in U.S. currency. There are on average about 30 bitcoin trans- actions per minute (Visa transactions average 200,000 per minute). The average bitcoin transaction size is about 16, i.e., on the order of $2,000 (the average Visa transaction is about $80). Bitcoin is thus a relatively small phe- nomenon, but it has been growing; the value of a bitcoin has increased tenfold since early 2013.1 What precisely is digital money? Money is a medium of exchange— something that is accepted in exchange for a valuable good or service, not for itself but to be exchanged later for another good or service. For thousands of years that medium has taken the form of a physical object whose supply is scarce, either naturally (precious metals) or artificially (a token issued by a monop- olist). But it has taken more disembod- ied forms as well, such as enforceable claims on some individual or entity transferred between buyer and seller. Nowadays in the United States, base money takes the physical form of coins (tokens issued by the United States Mint under authority of Congress) and notes (which used to be circulating claims on the Federal Reserve but are now in the nature of paper tokens), as well as the electronic form of reserves, which are claims held on the books of the Federal Reserve by depository institu- tions (claims to notes and coins). Bitcoin is not a claim to a physical object or to a currency; it aims to be itself a currency and replace the physical ob- ject with a computer file. When a phys- ical object is exchanged, there is little doubt that the giver owns it and the recipient receives it (whether the ob- ject is what it seems to be—and not a counterfeit—has always been a problem for money, but one that is mitigated in a variety of ways). A digital file is easily created and duplicated, so how do we avoid doubts about its authenticity as currency? The solution is basically re- cursive. Assume that my ownership of the file is ascertained. The bitcoin protocol ensures that the transaction by which I cede ownership of the bitcoin is validated by adding it to a record of all transactions. The recipient’s owner- ship is now validated. A simple method of validating the trans- action would be to entrust a central Bitcoin is an elegant implementation of a digital currency, but can it truly rival or replace existing currencies? 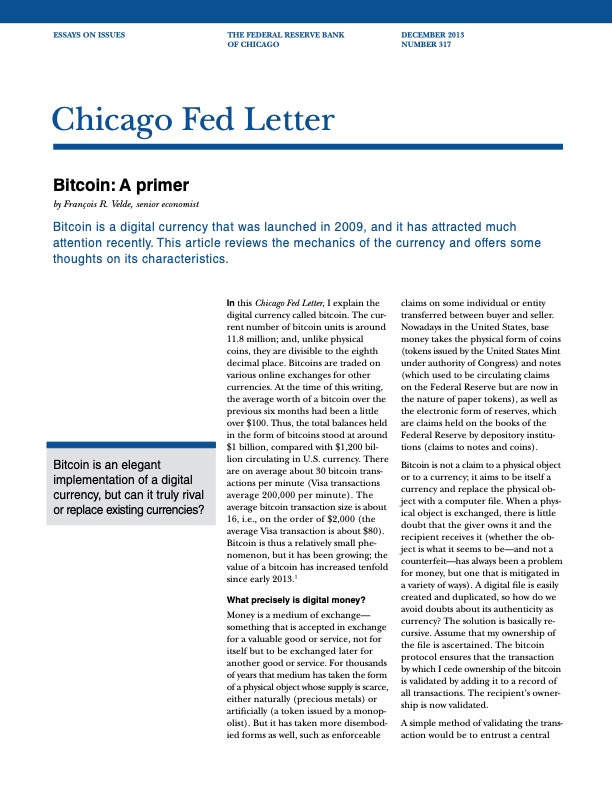