ETHEREUM: A SECURE DECENTRALISED GENERALISED TRANSACTION LEDGER BERLIN VERSION 888949c – 2021-10-15 DR. GAVIN WOOD FOUNDER, ETHEREUM & PARITY GAVIN@PARITY.IO Abstract. The blockchain paradigm when coupled with cryptographically-secured transactions has demonstrated its utility through a number of projects, with Bitcoin being one of the most notable ones. Each such project can be seen as a simple application on a decentralised, but singleton, compute resource. We can call this paradigm a transactional singleton machine with shared-state. Ethereum implements this paradigm in a generalised manner. Furthermore it provides a plurality of such resources, each with a distinct state and operating code but able to interact through a message-passing framework with others. We discuss its design, implementation issues, the opportunities it provides and the future hurdles we envisage. 1. Introduction With ubiquitous internet connections in most places of the world, global information transmission has become incredibly cheap. Technology-rooted movements like Bit- coin have demonstrated through the power of the default, consensus mechanisms, and voluntary respect of the social contract, that it is possible to use the internet to make a decentralised value-transfer system that can be shared across the world and virtually free to use. This system can be said to be a very specialised version of a cryptographi- cally secure, transaction-based state machine. Follow-up systems such as Namecoin adapted this original “currency application” of the technology into other applications albeit rather simplistic ones. Ethereum is a project which attempts to build the gen- eralised technology; technology on which all transaction- based state machine concepts may be built. Moreover it aims to provide to the end-developer a tightly integrated end-to-end system for building software on a hitherto un- explored compute paradigm in the mainstream: a trustful object messaging compute framework. 1.1. Driving Factors. There are many goals of this project; one key goal is to facilitate transactions between consenting individuals who would otherwise have no means to trust one another. This may be due to geographical separation, interfacing difficulty, or perhaps the incompati- bility, incompetence, unwillingness, expense, uncertainty, inconvenience, or corruption of existing legal systems. By specifying a state-change system through a rich and unam- biguous language, and furthermore architecting a system such that we can reasonably expect that an agreement will be thus enforced autonomously, we can provide a means to this end. Dealings in this proposed system would have several attributes not often found in the real world. The incorrupt- ibility of judgement, often difficult to find, comes naturally from a disinterested algorithmic interpreter. Transparency, or being able to see exactly how a state or judgement came about through the transaction log and rules or instructional codes, never happens perfectly in human-based systems since natural language is necessarily vague, information is often lacking, and plain old prejudices are difficult to shake. Overall, we wish to provide a system such that users can be guaranteed that no matter with which other indi- viduals, systems or organisations they interact, they can do so with absolute confidence in the possible outcomes and how those outcomes might come about. 1.2. Previous Work. Buterin [2013a] first proposed the kernel of this work in late November, 2013. Though now evolved in many ways, the key functionality of a block- chain with a Turing-complete language and an effectively unlimited inter-transaction storage capability remains un- changed. Dwork and Naor [1992] provided the first work into the usage of a cryptographic proof of computational expendi- ture (“proof-of-work”) as a means of transmitting a value signal over the Internet. The value-signal was utilised here as a spam deterrence mechanism rather than any kind of currency, but critically demonstrated the potential for a basic data channel to carry a strong economic signal, allowing a receiver to make a physical assertion without having to rely upon trust. Back [2002] later produced a system in a similar vein. The first example of utilising the proof-of-work as a strong economic signal to secure a currency was by Vish- numurthy et al. [2003]. In this instance, the token was used to keep peer-to-peer file trading in check, providing “consumers” with the ability to make micro-payments to “suppliers” for their services. The security model afforded by the proof-of-work was augmented with digital signatures and a ledger in order to ensure that the historical record couldn’t be corrupted and that malicious actors could not spoof payment or unjustly complain about service deliv- ery. Five years later, Nakamoto [2008] introduced another such proof-of-work-secured value token, somewhat wider in scope. The fruits of this project, Bitcoin, became the first widely adopted global decentralised transaction ledger. Other projects built on Bitcoin’s success; the alt-coins introduced numerous other currencies through alteration to the protocol. Some of the best known are Litecoin and Primecoin, discussed by Sprankel [2013]. Other projects sought to take the core value content mechanism of the pro- tocol and repurpose it; Aron [2012] discusses, for example, 1 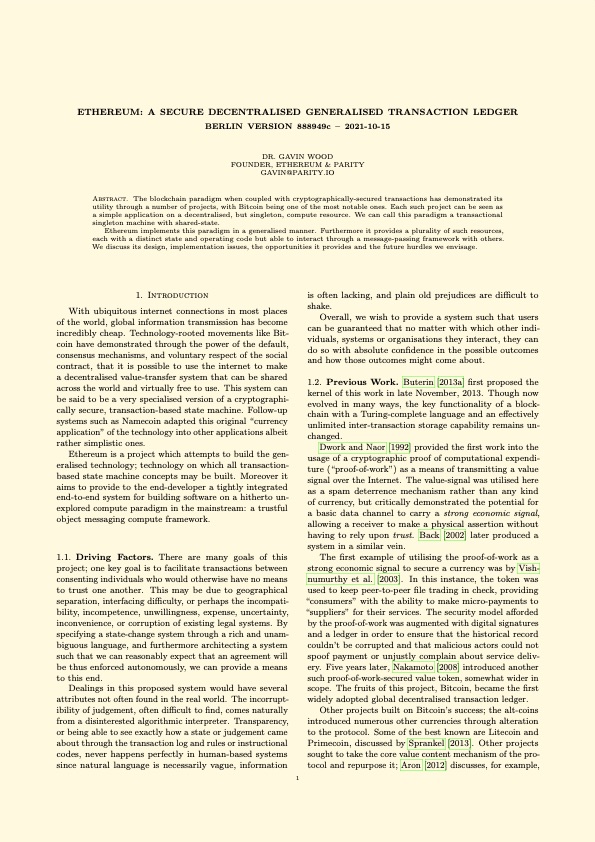