Carbon Dioxide (R744) - The New Refrigerant Introduction and Discussion In the early days of refrigeration the two refrigerants in common use were ammonia and carbon dioxide. Both were problematic - ammonia is toxic and carbon dioxide requires extremely high pressures (from around 30 to 200 atmospheres!) to operate in a refrigeration cycle, and since it operates on a transcritical cycle the compressor outlet temperature is extremely high (around 160°C). When Freon 12 (dichloro- diflouro-methane) was discovered it totally took over as the refrigerant of choice. It is an extremely stable, non toxic fluid, which does not interact with the compressor lubricant, and operates at pressures always somewhat higher than atmospheric, so that if any leakage occurred, air would not leak into the system, thus one could recharge without having to apply vacuum. Unfortunately when the refrigerant does ultimately leak and make its way up to the ozone layer the ultraviolet radiation breaks up the molecule releasing the highly active chlorine radicals, which help to deplete the ozone layer. Freon 12 has since been banned from usage on a global scale, and has been essentially replaced by chlorine free R134a (tetraflouro-ethane) - not as stable as Freon 12, however it does not have ozone depletion characteristics. Recently, however, the international scientific consensus is that Global Warming is caused by human energy related activity, and various man made substances are defined on the basis of a Global Warming Potential (GWP) with reference to carbon dioxide (GWP = 1). R134a has been found to have a GWP of 1300 and in Europe, within a few years, automobile air conditioning systems will be barred from using R134a as a refrigerant. The new hot topic is a return to carbon dioxide as a refrigerant. The previous two major problems of high pressure and high compressor temperature are found in fact to be advantageous. The very high cycle pressure results in a high fluid density throughout the cycle, allowing miniturization of the systems for the same heat pumping power requirements. Furthermore the high outlet temperature will allow instant defrosting of automobile windshields (we don't have to wait until the car engine warms up) and can be used for combined space heating and hot water heating in home usage (refer for example: Norwegian IEA Heatpump Program Annex28). Recent update March 2013 - Volkswagen, Daimler, Audi, BMW and Porsche have announced plans to develop CO2 MAC (Mobile Air Conditioning) systems (refer: Environmental Leader) 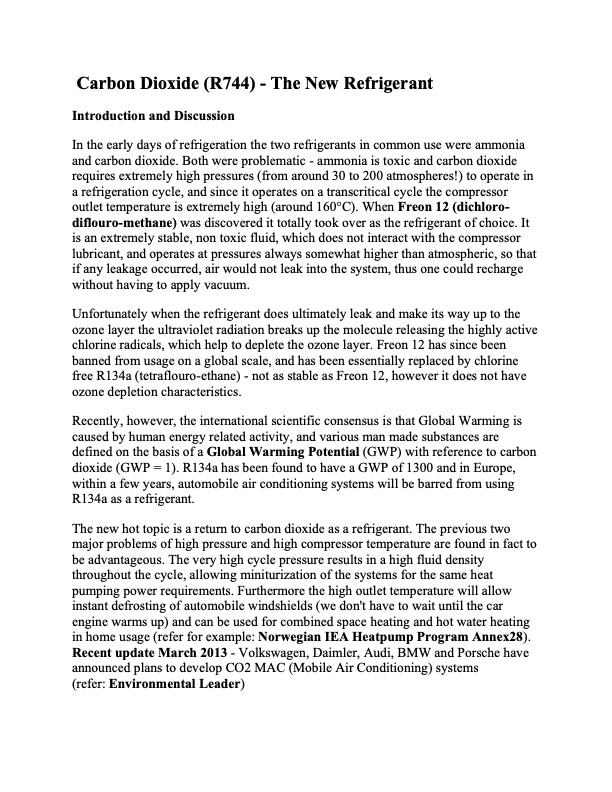