Brazilian Journal of Chemical Engineering INTRODUCTION Zeolites are inorganic crystalline structures with uniform-sized pores of molecular dimensions. These inorganic materials have been used extensively as catalysts and adsorbents. More recently, continuous polycrystalline zeolite layers have been deposited on porous supports and used as zeolite membranes (Bowen et al., 2004). A zeolite membrane is a porous layer that can separate mixtures by adsorption and diffusion differences and, in some cases, by molecular sieving. The first reported zeolite membranes were prepared by Suzuki (Suzuki, 1987) and more than12 zeolite structures have been prepared as membranes (Bowen et al., 2003). The use of natural zeolites for environmental applications, especially for nuclear wastewaters and hazardous industrial wastes, is gaining new research interest, mainly due to their properties and significant worldwide occurrence (Kazemian, 1999; Panayotova, 2001; Petruzzelli et al., 1999; Wang et al., 2000). Different liquid wastes may be produced continuously or discontinuously and may vary considerably in volume, quality and chemical composition. A wide range of treatment methods has been used in industry to treat wastes. During the past ISSN 0104-6632 Printed in Brazil www.abeq.org.br/bjche Vol. 28, No. 04, pp. 669 - 677, October - December, 2011 DESALINATION OF AQUEOUS SOLUTIONS BY LTA AND MFI ZEOLITE MEMBRANES USING PERVAPORATION METHOD A. Malekpour1*, A. Samadi-Maybodi2 and M. R. Sadati2 1Department of Chemistry, University of Isfahan, Phone: +98 311 7932714, Fax: +98 311 6689732, Isfahan 81746-73441 Iran. E-mail: a.malekpour@sci.ui.ac.ir 2Department of Chemistry, Faculty of Basic Science, Mazandaran University, Babolsar, Iran. (Submitted: October 8, 2010 ; Revised: February 22, 2011 ; Accepted: May 17, 2011) Abstract - LTA and MFI zeolite membranes were hydrothermally grown on the surface of an α-alumina porous support. The synthesized membranes were used for removal of cationic and anionic species from aqueous solutions by the pervaporation method. The perfection of the membranes was improved by employing the multi-stage synthesis method. The membranes were characterized by XRD, SEM and IR methods. The membranes were initially evaluated by the pervaporation separation of water from aqueous 2-propanol mixtures. The separation factors obtained were 7081 and 105 for NaA and ZSM-5 membranes, respectively. The ability of membranes for desalination of some aqueous solutions containing I-, Cs+ and Sr2+ ions was examined in various conditions. These ionic species were chosen because of their importance in the nuclear sciences. Both membranes effectively removed (more than 99 wt%) I-, Cs+ and Sr2+ from their single- salt solutions (0.001mol dm-3) over a temperature range of 298–338 K. The effects of parameters such as time and temperature on the separation factors and fluxes were investigated. This work shows that, due to their excellent chemical, thermal and mechanical stability, the zeolitic membranes are useful for desalination of aqueous solutions and treating saline wastewaters by pervaporation. Therefore, this method has the ability to desalinate harsh environment solutions involving strong solvent and radioactive components. Keywords: Desalination; Zeolite membranes; Pervaporation (PV); Ion rejection; Wastewater treatment. *To whom correspondence should be addressed 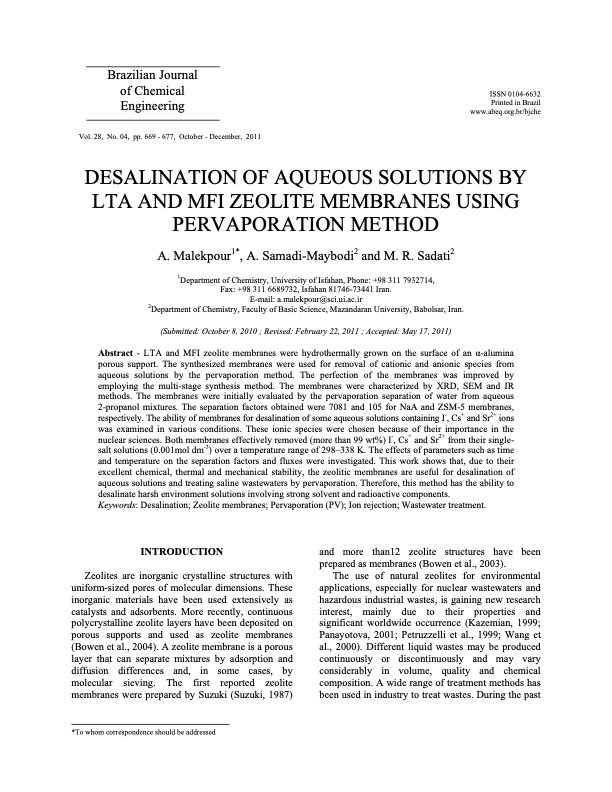