CHEMICAL SENSORS JOURNAL OF MA TERIALS SCIENCE 38 (2003) 4307– 4317 Development of a selective gas sensor utilizing a perm-selective zeolite membrane W. L. RAUCH∗, M. LIU Georgia Institute of Technology, School of Materials Science and Engineering, Atlanta, GA 30332-0245, USA E-mail: bill.rauch@mse.gatech.edu Reported here is a novel sensor that utilizes a zeolite film to selectively limit gas exposure of the sensing surface. A unique amperometric sensor design based on a non-porous mixed conducting sensing electrode enables the formation of a continuous zeolite film covering the entire sensor surface. The sensor was tested in a variety of oxygen containing gases. The sensor without a zeolite film responded strongly to both oxygen and carbon dioxide at a bias of 1.8 V. In contrast, the sensor coated with a zeolite film showed a discernable, but diminished response to oxygen, and a more marked drop in response to CO2 indicating that the diffusion of oxygen through the zeolite film is preferential to that of CO2. The response of the zeolite coated sensor to a mixture of oxygen and carbon dioxide gases is attributed primarily to the oxygen content. Expanding this concept using a variety of different zeolite structures covering an array of sensors, complete analyses of complex gaseous mixtures could be performed in a very small device. ⃝C 1. Introduction The automotive market relies on gas sensors for the con- trol of combustion to attain increased fuel efficiency, reduced emissions, and adequate power [1]. This is particularly important in these times of diminishing oil supplies and global warming. Lean-burn combus- tion [2] holds promises to reduce CO2, a necessary by-product from hydrocarbon fuels, where the amount of fuel is limited to no more than the stoichiometric amount for combustion. Efficiencies improve signif- icantly and the amount of CO2 emitted is decreased based on similar power consumption. The drawback to lean burn engines is that they produce high levels of NOx [3]. It is supposed that rigorous control of the engine could find a fine line where both high fuel ef- ficiency with minimal CO2 output and low levels of NOx emissions is possible, but current oxygen sensors are not sensitive enough in the lean-burn range [4]. Many sensor designs rely on a response based on the reduction or oxidation of the gas present near the sensor surface. While some sensors have enhanced selectivity based on surface treatments [5–7], few can claim to have true gas selectivity. Selectivity allows the distinc- tion between reducing gases such as nitric oxide from others such as hydrocarbons. Ideally, a sensor, or array of sensors, would make it possible to quantify all or nearly all gases in a complex gas mixture as would be seen in many combustion processes. To achieve this goal, sensors of high selectivity are needed. Among many approaches that have been tried, one very promising one is the combination of elec- trochemical and molecular sieving effects to effec- tively separate gaseous species. The success of this ∗Author to whom all correspondence should be addressed. 0022–2461 ⃝C 2003 Kluwer Academic Publishers 2003 Kluwer Academic Publishers approach depends not only on the development of a high sensitivity amperometric oxygen sensor based on mixed conducting membranes but also on fabrication of a full-coverage zeolite perm-selective membrane for gas filtering. To this end, an amperometric sensor has been developed which is composed of an oxygen- transporting zirconia electrolyte and a mixed conduct- ing electrode system. The sensing electrode is produced from a zirconia-platinum composite that is still electro- chemically active when polished to a smooth surface. This surface accommodates the deposition and growth of a zeolite membrane that provides selectivity of the gaseous species to which the sensor is exposed. Creating the proper interaction zone in the electrode is of prime importance. The electrode must have suffi- cient contact between both ionic and electronic conduc- tors, for it is only where these phases meet that reactions can readily occur. The region where the ionic conduct- ing and electronic conducting phases meet the chemical environment is known as the triple phase boundary. In a typical electrochemical system, including sensors, fuel cells, and batteries, the triple phase boundaries are ex- panded in two ways. The first is the use of highly porous electrode materials to maximize the contact with the chemical environment. The second method is the uti- lization of mixed conducting materials. In this case, the triple phase boundary cannot be ex- panded through the use of high porosity, since the sur- face must be smooth to be best suited to zeolite applica- tion. In fact, the exact opposite happens in the smooth electrode, the triple phase boundary is minimized. If a typical metallic electrode were used, the triple phase boundary would go to zero. The mixed-conducting 4307 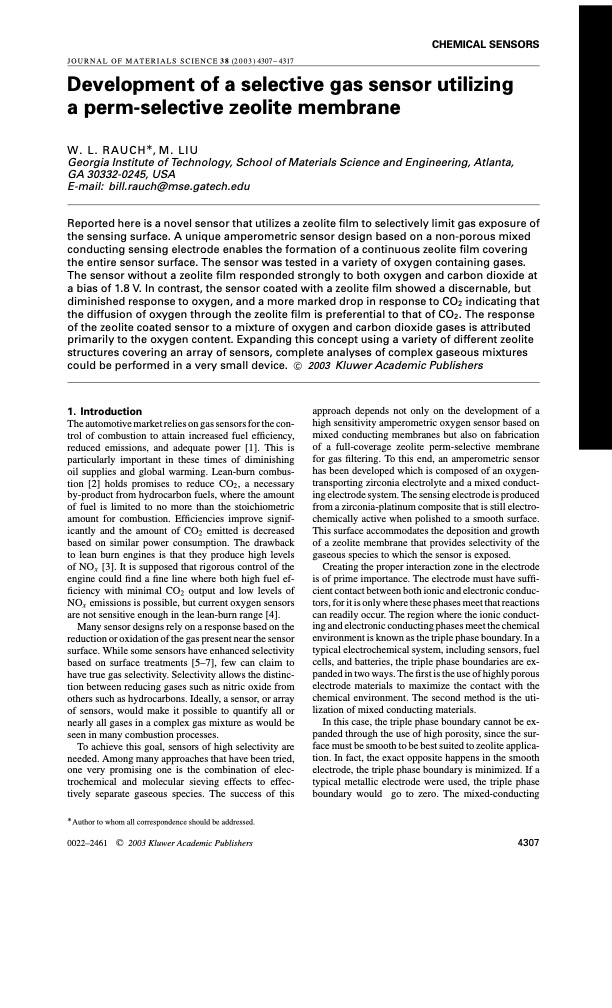