Energy Harvesting from the Waste Heat of an Electrical Oven TEG

The Sixth Scientific Conference “Renewable Energy and its Applications” IOP Publishing IOP Conf. Series: Journal of Physics: Conf. Ser1i2e3s415063728(9200‘1’8“)”012024 doi:10.1088/1742-6596/1032/1/012024 Energy Harvesting from the Waste Heat of an Electrical Oven via Thermoelectric Generator HasanTHashim College of Engineering-Kerbala University-Kerbala-IRAQ * Corresponding author. E-mail address: hasanth2008@yahoo.com Abstract. This paper presents an attempt to generate the electricity by recovering the waste heat of an electrical oven. An experimental work has been done to investigate the electricity production by using a thermoelectric generator (TEG). The performance characterization of TEG was experimentally investigated in an open circuit mode by connecting the multimeter directly to the TEG and in a closed circuit mode by connecting different load to the TEG. The key results showed that it is possible to generate up to 1 V and 30mW in the open circuit condition, while the TEG could generate a 0.5 V and 25 mW in the closed circuit conditions when the maximum temperature differences across the TEG is about 20 °C. The power output could be increased by using more than one TEG module. This power could be used for charging a cell phone or light emitting diodes LEDs during cooking. KEYWORDS: Wasteheat,heatrecovery,thermoelectricgenerator,electricitygeneration. 1. Introduction The major source of electricity is generated through stations based on burring of the fossil fuels, which pollute the environment. Therefore, finding new sources of energy is important to overcome this problem. Renewable energy is considered as a reliable source of energy because of many reasons such as environment-friendly and unlimited source of energy. Solar energy is one type of renewable energy that converts the sun light into electricity by using photovoltaic. Thermoelectric generator is made from semiconductors N-type and P-type which is able to convert the waste heat into electricity using the electron as a working fluid by Seebeck effect [1]. Harvesting solar energy by thermoelectric generator was studied by many researchers [2][3][4][5] moreover, the use of biomass cooker stove as a source of heat for thermoelectric was investigated by [6][7]. The recovery of waste heat that dissipated to the environment was studied by using two stroke petrol engine and TEG [8]. An attempt to recharge a battery in a compression ignition engine has been done by experimental and theoretical work [9]. A waste heat recovery system based on a thermoelectric generator was designed by Demir and Dincer [10]. The system was integrated with the exhaust manifold of the automobile to recover the waste heat. Three TEG modules were used in the study. The maximum generated power from the waste heat was 158 W. The energy conversion efficiency was calculated based on the heat transfer rate from the hot side to the thermoelectric generators and the generated power. There are many ways to harvest the waste heat at home [11][12][13]. However, integrating TEG with home electrical oven has not investigated yet. The objective of this study is to investigate experimentally the electricity generation by TEG using the waste heat from electric oven. This electricity can be used to charge a battery of a cell phone or to power LEDs inside a house. Content from this work may be used under the terms of the Creative Commons Attribution 3.0 licence. Any further distribution of this work must maintain attribution to the author(s) and the title of the work, journal citation and DOI. Published under licence by IOP Publishing Ltd 1 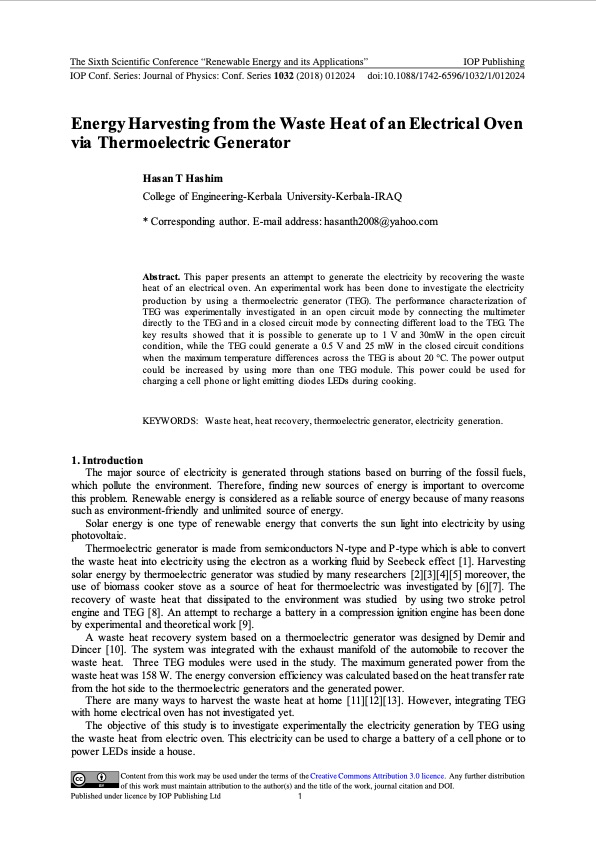 Energy Harvesting from the Waste Heat of an Electrical Oven TEG