Stall Control by Plasma Actuators: Characterization along the Airfoil Span

Energies 2020, 13, 1374 2 of 20 signal, especially when dealing with a deep stall configuration [6,7,10], provided that the wave frequency and duty cycle are properly chosen [11]. Recent studies demonstrated that nanosecond pulsed DBD, with their very low active time, can manipulate separation for Reynolds numbers even above 2 × 106 [12]. If located near the trailing edge, plasma actuators can behave as flaps increasing the lift coefficient [6,13]. The DBD actuator performance can be enhanced through the optimization of the input signal [2,14] or of the exposed electrode geometry that can be specifically designed for each particular application [15]. Sharp tips are known to increase ionic wind and thrust [14], inducing also transverse velocity components that give rise to streamwise vortex structures [16], so that their interaction with the flow field improves the boundary layer mixing and the actuator control capabilities. The present research, focused on a stalled airfoil, deals with the flow modifications due to a DBD with multiple triangular tips, regularly spaced [17–21]. Many of the researches on plasma actuators are dedicated to their applications on airfoils or exploit airfoils as test cases. In most cases, the plasma–flow interaction is only characterized in correspondence with the central sections, implicitly performing a two-dimensional analysis on a flow that is actually three-dimensional. Only a few studies, such as References [6,12], introduce large end-plates or other purposely designed devices that counteract the development of three-dimensional flow structures. The present work follows instead an opposite approach: to allow the complete development of the three-dimensional structures that naturally characterize the aerodynamic flow field, the airfoil model is intentionally not provided with end-plates. Accordingly, in this work, the DBD test is performed inherently accounting for the flow three-dimensionality, characterizing the plasma-flow interaction all along the airfoil span. This is achieved by repeating PIV measurements on different spanwise distributed planes. In turn, this allowed to identify the flow region most affected by the actuator, suggesting some design modifications that can improve the device efficiency. This work at first describes the experimental setup and its validation through PIV measures performed on the central sections. Then, it focuses on the analysis of the spanwise distributed sections, characterizing the actuator influence on the three-dimensional flow. Finally an approximated estimation of the actuator efficiency is reported. 2. Experimental Setup 2.1. Airfoil The main element of the setup is the wing model purposely built for this experiment, with span S = 930 mm, constrained by the test section width, and chord c = 300 mm. A NACA0015 airfoil was chosen because it has been widely used in literature about plasma actuators tests, becoming a standard in this field (References [6,8,10,11,22] are just a few examples). As exposed in the Introduction section, no end-plates were integrated in order to allow a complete development of the relevant three-dimensional flow that is not negligible despite the relatively good aspect ratio S/c = 3.1. The flow pattern cannot be considered identical to the one obtained in unbounded streams; however, the gaps between wing tips and lateral walls, equal to 35 mm ≈ 0.12 c, are large enough to allow the desired study of the three-dimensional flow. In fact, it is reported that very small gaps, in the order of 0.005 c, already give visible effects on the streamlines pattern that may affect also the centerline flow [23]. As shown in the Results section, the larger gaps used in this experiment lead to a separated region similar to the so-called mushroom stall cell observed by testing wings in free-jet facilities [23]. As a consequence, the boundary of the separated region in this experiment becomes a curved line on the airfoil surface, well known in literature, where the phenomenon is documented for several airfoils including NACA 0015, even if it mainly depends on the aspect ratio [24–26]. The model is realized in ureol, a polyurethane foam extremely rigid and electrically insulating. It is completed by two side ribs and two tubular shafts that permit to couple it with a supporting structure that allows to set the angle of attack and firmly holds the airfoil during tests. On one side, the 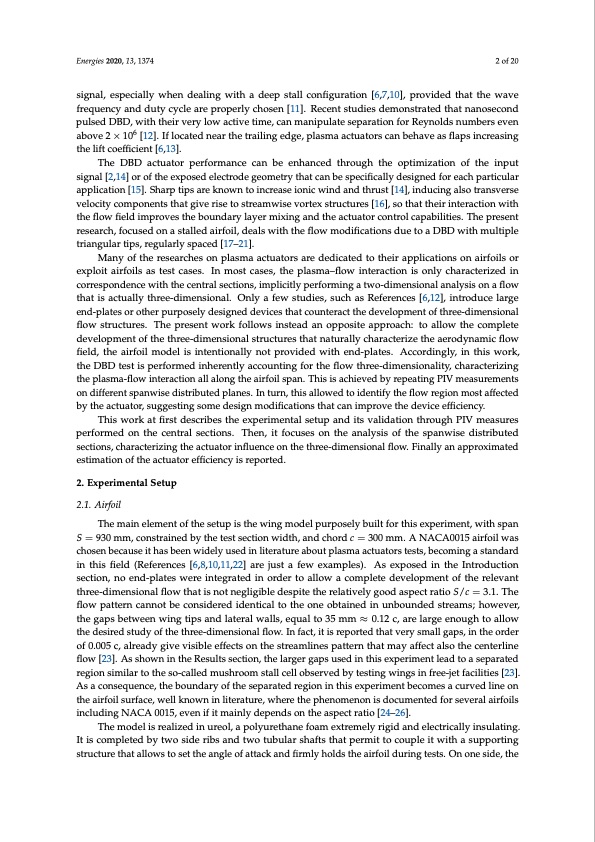 Stall Control by Plasma Actuators: Characterization along the Airfoil Span