Energies 2021, 14, 204 2 of 14 and achieved a maximum power output of 1068 W at 300 HP and 1700 RPM. The study also reported that bismuth telluride (Bi2Te3) was the best thermoelectric material for exhaust waste heat applications, as it demonstrated the highest performance despite the maximum operating temperature. Matsubara [6] developed a high-efficiency TEG for gasoline engines in 2002. The TEG prototype was installed in a pick-up truck, and a 1–2% improvement in fuel efficiency was reported depending on the truck’s speed. The study concluded that average ZT-values from 1.5 to 2 were needed in order to achieve 10% overall efficiency. Researchers at BMW developed a Bi2Te3 TEG prototype in 2009. The TEG consisted of 24 modules and achieved 200 W of electrical power output at a speed of 130 km/h [7]. Simultaneously, General Motors developed a TEG system with an anticipated power output of 350 W and 600 W under city and highway driving conditions, respectively [8]. The tested thermoelectric module achieved a maximum power output of 9 W at constant hot and cold junction temperatures of 550 ◦C and 80 ◦C, respectively [9]. Yu and Chau [10] theoretically investigated a TEG system for automotive exhaust, and then experimentally analyzed the maximum power output. Their study also investigated the relationship between power output and load resistance at various hot-side temperatures. The results indicated that as the temperature of the hot side increased, the internal load resistance would also increase. Liu et al. [11] constructed a TEG energy-harvesting system for automotive exhaust pipes. The system was practically tested on-road, achieving an efficiency of 1.25% and a maximum power output of 600 W at an average temperature difference of 182 ◦C. The study concluded that design optimization was essential for improving the system’s performance. To improve the TEG module performance, Zhang et al. [12] developed a nanostruc- tured bulk material and manufactured module that has a power density of 5.26 W/cm2 and a temperature difference of 500 ◦C. The authors designed and constructed a TEG system that consisted of 400 modules, and tested it on an automotive diesel engine. The maximum produced power output was 1002.6 W, at an average temperature of 550 ◦C and an exhaust mass flow rate of 480 g/s. Kim et al. [13] experimentally investigated a TEG system for waste heat recovery of a six-cylinder diesel engine. The system included 40 customized modules installed on a rectangular heat exchanger with a dimension of 253.5 mm × 372 mm × 60 mm. The engine was operated with a rotational speed in the range of 1000–2000 RPM, and an engine brake mean effective pressure of 0.2–1.0 MPa. The maximum power output achieved was 119 W at 2000 RPM and 0.6 MPa, while the conversion efficiency was in the range of 0.9–2.8%. The study indicated that the power output increased with the engine load or speed, and the pressure drops were below 1.46 kPa under all experimental conditions. In their study on automotive exhaust thermoelectric generators, Li et al. [14] inves- tigated the influence that the number of thermoelectric modules and their distribution patterns had on the system performance. The system consisted of Bi2Te3-based modules and was installed on a 11.12 L automotive diesel engine. The independent cooling system consisted of 18 single-column water tanks. The results showed that the best results were achieved when the exhaust temperature and mass flow rate were 805 K and 0.5 kg/s, respectively. The maximum electrical power generated was 217.35 W, and the conversion efficiency was 3.45%. In a recent innovative study, Li et al. [15] designed and tested a mesoscale combustor- powered TEG with enhanced heat collection. The system absorbed heat from a stagnation- point reverse-flow (SPRF) combustor, and was also equipped with a built-in heat exchanger that rejects heat to a water-cooled heat sink. Among the several methods investigated to improve both power output and thermoelectric efficiency, the study indicated that the load resistance ratio must be greater than one; however, the study did not determine this value. From previous studies in the open literature regarding TEG systems for automotive exhaust, it is apparent that their main limitations are their very low densities of waste heat and their improper design despite the system’s size. The current study presents an analyti- 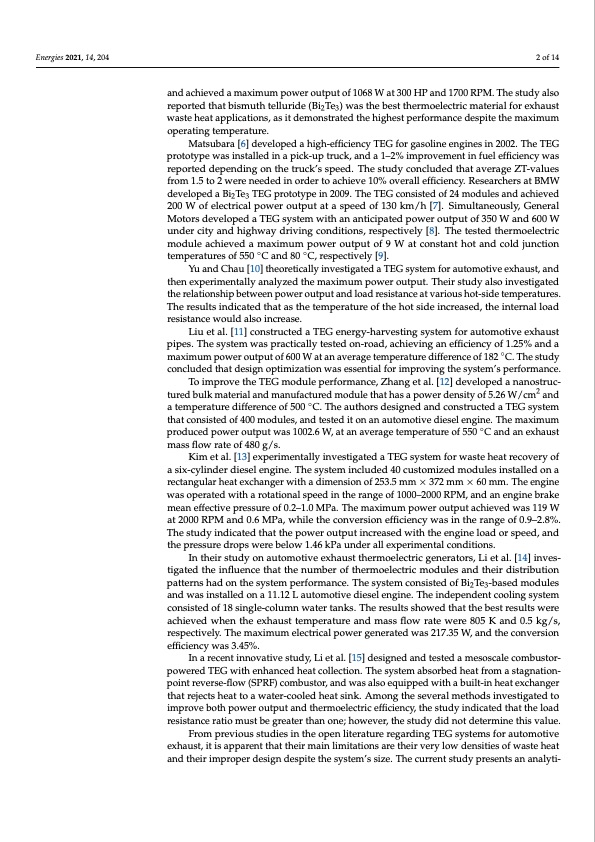