Molecules 2020, 25, 5572 3 of 26 chemical composition, presence of impurities, thermal history and measurement conditions (such as the heating or cooling rate in dynamic conditions), and the dwell time under isothermal conditions. The polymorphism of triglycerides has been the subject of intensive study since 1853 when Duffy [9] noticed the occurrence of three melting points in tristearin at 52 ◦C, 64.2 ◦C and 69.7 ◦C. The chemical structure of tristearin is shown below in Figure 2. Figure 2. Chemical structure of Tristearin. Since tristearin is formed from glycerol and three molecules of stearic acid (18 carbons in alkylic chain), tristearin is abbreviated as 18.18.18. In particular, he noticed that tristearin was able to adopt different forms depending on the thermal conditions in which it was melted or crystallized, and that with higher degrees of impurity the second melting point could no longer be detected. Therefore, he proposed that molecules of tristearin could arrange themselves to form distinct crystalline structures, thereby giving rise to polymorphism. However, it was not until the early 1900s with the advent of X-ray diffraction methods that the existence of different crystal structures could be confirmed. Following the introduction of this technique, Duffy’s findings inspired researchers to investigate more intensively the polymorphism of triglycerides, causing a surge in the number of publications related to the subject between 1939 and 1983 [10–19]. Based on early X-ray diffraction studies, the polymorphic behaviour of saturated symmetrical triglycerides (particularly trilaurin, trimyristin, tripalmitin and tristearin) have been studied to identify four distinct polymorphic phases. These are namely, listed in order of growing melting temperature and stability, the γ, α, β,’ and β forms. The γ phase was denoted by Malkin [11] as similar to an anisotropic glass, thus lacking order and symmetry, and was clearly distinguished from the other phases as the “vitreous phase”. However, later the vitreous phase has been recognized and officially referred to as the α phase, while the α phase originally described by Malkin has now been identified as one of the possible β’ forms. Therefore, at present, the official convention for the determination of triglycerides’ polymorphic phases follows Lutton’s formulation [20] : • α form: it appears as an amorphous mass of small crystals with molecules organized in random degrees of rotation around the chain axis but at constant distances [21,22]. For simple triglycerides, this corresponds to hexagonal subcells [23]. The α phase is similar to a “colloidal” glass [11]. It is thermodynamically unstable, but kinetically favorable; therefore, it will be the prevalent phase in fast heating-cooling conditions. This form usually exhibits no alternation in physical properties for odd and even number of carbon atoms. Only one α form exists for a given compound [15,24]. Over time, the α phase will crystallize irreversibly to form the β phase. • β’ form: it is usually consisting of spherulitic crystals [21,22]. For simple triglycerides, this corresponds to orthorombic subcells [23]. It is thermodynamically unstable with melting points between those of the α and β phases. Mixtures, asymmetrical or unsaturated triglycerides are more prone to presenting β’ phases. As reported by Hoerr et al. [14] the β’ phase is highly influenced by the presence of impurities, as percentages over 2–3% can block completely its formation. Different variations of the β form can exist for given compounds [15,24]. This form is the most difficult to characterize, as it is the most unstable phase and will spontaneously and irreversibly evolve into β phase over time. 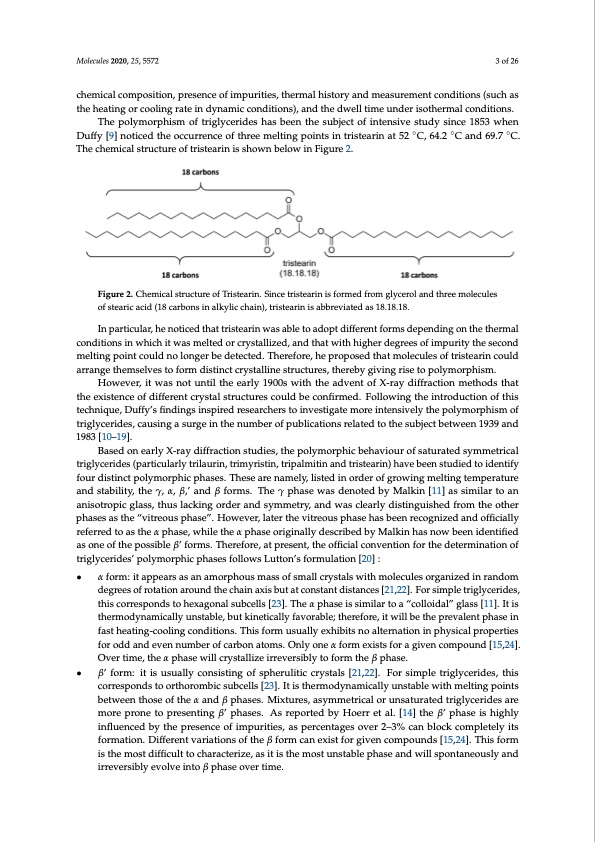