(IJACSA) International Journal of Advanced Computer Science and Applications, Vol. 6, No. 9, 2015 Cryptocurrency Mining – Transition to Cloud Hari Krishnan R.1 Department of Computer Science and Engineering SRM University, Chennai, India Sai Saketh Y. 2 Department of Computer Science and Engineering SRM University, Chennai, India Venkata Tej Vaibhav M.3 Department of Computer Science and Engineering SRM University, Chennai, India Abstract—Cryptocurrency, a form of digital currency that has an open and decentralized system and uses cryptography to enhance security and control the creation of new units, is touted to be the next step from conventional monetary transactions. Many cryptocurrencies exist today, with Bitcoin being the most prominent of them. Cryptocurrencies are generated by mining, as a fee for validating any transaction. The rate of generating hashes, which validate any transaction, has been increased by the use of specialized machines such as FPGAs and ASICs, running complex hashing algorithms like SHA-256 and Scrypt, thereby leading to faster generation of cryptocurrencies. This arms race for cheaper-yet-efficient machines has been on since the day the first cryptocurrency, Bitcoin, was introduced in 2009. However, with more people venturing into the world of virtual currency, generating hashes for this validation has become far more complex over the years, with miners having to invest huge sums of money on employing multiple high performance ASICs. Thus the value of the currency obtained for finding a hash did not justify the amount of money spent on setting up the machines, the cooling facilities to overcome the enormous amount of heat they produce and electricity required to run them. The next logical step in this is to utilize the power of cloud computing. Miners leasing super computers that generate hashes at astonishing rates that have a high probability of profits, with the same machine being leased to more than one person on a time bound basis is a win-win situation to both the miners, as well as the cloud service providers. This paper throws light on the nuances of cryptocurrency mining process, the traditional machines used for mining, their limitations, about how cloud based mining is the logical next step and the advantage that cloud platform offers over the traditional machines. Keywords—Cryptocurrency; Bitcoin mining; Cloud mining; Double Spending; Profitability I. INTRODUCTION TO MINING Mining is the integral process wherein generation, transmission and validation of transactions of cryptocurrencies is done. It ensures stable, secure and safe propagation of the currency from the payer to payee. Unlike fiat currency, where a centralized authority controls and regulates the transactions, cryptocurrencies are decentralized and work on a peer-to-peer system. Banks that generate physical currency and monitor the transactions require huge infrastructure to function and operate. Cryptocurrencies overcome this need by implementing a mining system where people in the network, called 'miners' or 'nodes', monitor and validate transactions which generates currency. In cryptocurrency, a transaction is a transfer of coins from one wallet to another. When a transaction is made, the details of the transaction will be broadcast to every node in the network. The transactions made over a set period of time are collected to form a 'Block'. To incorporate transparency in the system, it is designed in such a way that all the transactions made from the inception of the currency are recorded and maintained in a general ledger called the 'Block chain' which, as the name suggests, is a list of blocks created from the beginning. Miners play a predominant role in mining. Miners process transactions by verifying the ownership of the currency from source to destination. Every transaction contains the hash of the previous transaction made by the owner through which authenticity of a present transaction is tested, thereby validating it. Miners also inhibit double spending of the currency through this validation process. The main purpose of mining is to generate and release coins into its coin economy. Whenever a transaction takes place and is validated, miners collect these transactions and include them into the block they are currently solving. Every block has to be solved before being broadcasted and put in the block chain. Solving of a block involves mathematical puzzles which are difficult to unlock and crack provided there will be some constraints on the output generated. Only on solving the mathematical puzzle is one allowed to add the block to the ledger and a reward of coins is given in return. Thus mining eventually boils down to a competition of mathematical puzzles to solve for the reward of coins. This mechanism prevents miners from easily procuring coins and thus maintains the fairness of the system. [1][2][3][4] II. MINING MACHINES Mining of crypto currency is done through purpose specific designed machines called as ̳Mining machines‘. The history of mining machines starts from CPU to the currently widely used ASICs. The periodic growth of mining difficulty led to evolution of new machines with higher efficiency than previously designed machines. The cost and performance of the mining machine determine its mining profitability, hence the design and its implementation is very crucial in mining. The various machines used in mining are: A. CPU During initial days of mining, CPU was used to mine the coins effectively with hash rates less than or equal to 10MH/sec. A personal PC with mining software installed in it was enough to cope with the mining process. But, due to the constant increase of difficulty in mining, usage of CPU‘s as mining machine became irrelevant to the evolving machines with higher hashing rates. A popular mining software for CPU mining was cpuminer. www.ijacsa.thesai.org 115 | P a g e 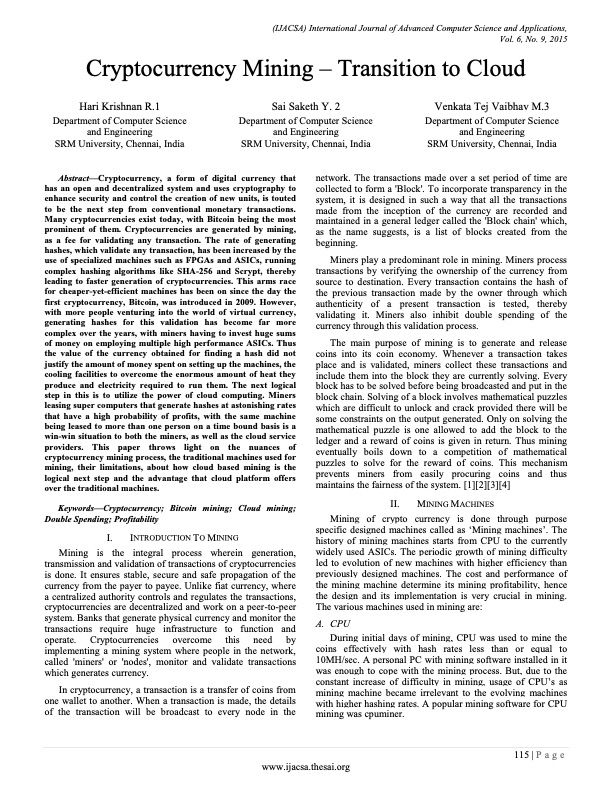