cpuminer is a simple client program that performs Pooled Mining or solo mining. The program receives proposed block data from the server, for which it tries to guess a nonce value that will result in a valid block. If a block hash with at least 32 consecutive zero bits is found, the block data containing the guessed nonce value is sent back to the server. If used in Pooled Mining mode, this block is called a "share" because the server is supposed to credit the registered user's account, according to the number of shares that user has contributed, and eventually transfer an amount of Bitcoins to the registered user's address. B. GPU (IJACSA) International Journal of Advanced Computer Science and Applications, Vol. 6, No. 9, 2015 Limitations:      C. Though Graphic cards can give over 800 MH/sec, but they are of high cost than normal CPU‘s. The GPUs cannot be used standalone. Each GPU has to be plugged into a PCI-E 8x or 16x slot, of which there are relatively few on commercial motherboards. All the components like motherboard, hard-drive and RAM are not used in GPU mining which ultimately increases the cost of mining. As the power of CPU mining didn‘t meet the growing demands, CPU with Graphic cards are used to mine the coins. Graphic cards contain Graphical Processing Units (GPU‘s), which are used to solve high mathematical calculation functions and complex polygons used in gaming. Different cryptocurrencies uses different hash-proof based algorithms to solve transaction blocks which require high mathematical lifting, hence GPU‘s were seen as a credible alternative to the CPU mining. GPU‘s require high additional power of 200-300W for mining effectively. GPU‘s normally takes two slots in a case or motherboard which makes it difficult to attach two or more GPU‘s to a single computer for greater performance. GPU mining is largely inactive these days as the mining difficulty has exceeded the levels it can compete and further, with the advent of FPGAs and ASICs into the field of mining A CPU core can execute 4 32-bit instructions per clock (using a 128-bit SSE instruction) or 8 via AVX (256-Bit), whereas a GPU like the Radeon HD 5970 can execute 3200 32-bit instructions per clock (using its 3200 ALUs or shaders). This is a difference of 800 (or 400 in case of AVX) times more instructions per clock. As of now, the fastest CPUs have up to 6, 8, or 12 cores and a somewhat higher frequency clock (2000-3000 MHz vs. 725 MHz for the Radeon HD 5970), but one HD5970 is still more than five times faster than four 12- core CPUs at 2.3GHz (which is also costlier at $4700 when compared to $350 for the HD5970). which vouched for good mining profitability. FPGA (Field Programmable Gate Array) June 2011 brought the first open-source FPGA Bitcoin miner implementations. With the constant increase of mining cost against the coins earned as a result of mining, it impacted mining profitability in a negative sense. GPU mining with its high mining cost and low $ per day return was incompetent to mine any more. There was an immediate need for an emergence of machines which could make the mining profitable for the miners to continue with the mining. In October 2010 an open-source OpenCL miner was released on the web which was rapidly optimized and adapted by miners. These miners would typically implement the SHA protocol in languages such as Java or Python which was FPGA known as Field Programmable Gate Array is a reprogrammable IC which can be configured or designed after manufacturing. FPGAs contain individual programmable logic blocks commonly called as Configurable Logic Blocks (CLB). These logic blocks are inter-connected in a manner that can be reconfigured. FPGAs contain large resources of logic gates compiled down by the hidden ISA of the GPU. Since these rigs are left to mine for many months the users aggressively tweak the voltages (to lower in order to reduce mining costs, or higher, with frequency, to increase Gh/s) and operating frequencies of video ram (lower to save energy, since memory is unused) and the GPU core itself, as well as parameters of the code such as the number of threads that are enqueued at a given instance, so as to maximize throughput within reasonable bounds of stability and temperature. Since the Bitcoin computation does not exercise the memory system, many of the critical paths and bottlenecks in the GPU are not exercised, which means that the system can be pushed beyond the normal bounds of reliability. Over time it often becomes necessary to retune the parameters as fans and power delivery system wear eventually causes the GPU core to run too and RAM‘s for complex digital computation. FPGAs are flexibly configurable and reprogrammable, hence a designer can design and implement any digital function. FPGAs are easier to synthesize than its other counterparts which made FPGAs a good option for Bitcoin mining. FPGAs are reusable as they can be reprogrammed very easily. FPGAs consume energy one-fifth less than that of GPU, which was a major issue with GPU mining. FPGAs are also good at rotate-by-constant operations and at bit-level operations used in hash-proof based algorithms like SHA256 used in Bitcoin transactions. slowly. The goal of scaling BTC hash rate through GPUs pushes the limits of consumer computing in amazing and novel ways. Despite such benefits GPU have some limitations. A Butterfly labs mini rig FPGA mines at around GPUs tend to be much more accessible than FPGAs for 25,200Mh/s with efficiency 20.26Mhash/J consuming 1,250Watts of power I contrast to the GPU‘s which mine at end users, requiring PC-building skills and avid forum reading but no formal training in parallel programming or FPGA tools. 800MH/s in general. www.ijacsa.thesai.org 116 | P a g e 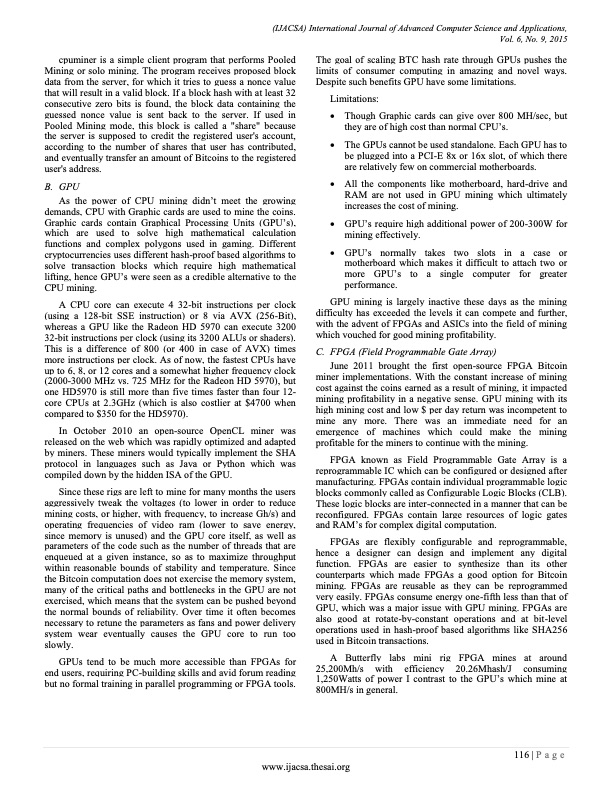