Green-PoW: An Energy-Efficient Blockchain Proof-of-Work Consensus Algorithm Noureddine Lasla, Member, IEEE, Lina Salim Alsahan, Mohamed Abdallah, Senior Member, IEEE and Mohamed Younis, Senior Member, IEEE Abstract—This paper opts to mitigate the energy-inefficiency of the Blockchain Proof-of-Work (PoW) consensus algorithm by rationally repurposing the power spent during the mining process. The original PoW mining scheme is designed to consider one block at a time and assign a reward to the first place winner of a computation race. To reduce the mining-related energy consumption, we propose to compensate the computation effort of the runner(s)-up of a mining round, by granting them exclusivity of solving the upcoming block in the next round. This will considerably reduce the number of competing nodes in the next round and consequently, the consumed energy. Our proposed scheme divides time into epochs, where each comprises two mining rounds; in the first one, all network nodes can participate in the mining process, whereas in the second round only runners-up can take part. Thus, the overall mining energy consumption can be reduced to nearly 50%. To the best of our knowledge, our proposed scheme is the first to considerably improve the energy consumption of the original PoW algorithm. Our analysis demonstrates the effectiveness of our scheme in reducing energy consumption, the probability of fork occurrences, the level of mining centralization presented in the original PoW algorithm, and the effect of transaction censorship attack. Index Terms—Blockchain, Consensus algorithm, Proof-of-Work, Energy-efficiency. ✦ 1 1 INTRODUCTION Nakamoto’s Blockchain protocol [1], also known as proof of work (PoW), is the first to achieve consensus in a permission-less setting, where anyone can join or leave during the protocol execution. Its main security design goal is to prevent Sybil attacks by relying on a computa- tional cryptographic puzzle-solving process. The protocol has proven its robustness since its first application (Bit- coin) in 2009. However, besides being the most trusted and secure public consensus algorithm, PoW is considered as a computation-intensive voting-based consensus process. For instance, PoW-powered Bitcoin mining consumes massive power that could suffice for a small country, like Denmark [2]. Moreover, as estimated by Digiconomist [3], Bitcoin us- age emits about 33.5 MtCO2e annually, as of May 2018. The main reason behind the PoW excessive energy is to make attacks against the blockchain network very expensive. In a nutshell, PoW is a leader election protocol that designates among network participants (miners) one leader that will append the next block to the chain. To attract more participants to join and maintain the network, and at the same time demotivate them from cheating, an honest miner can be elected to receive a very attractive reward if it can solve a computationally arduous puzzle. The idea behind making a difficult puzzle in PoW consensus algorithm is to bound the economic capacity of an adversary to successfully • N. Lasla, L. S. Alsahan and M. Abdallah are with the Division of Infor- mation and Computing Technology, College of Science and Engineering, Hamad Bin Khalifa University (HBKU), Doha, Qatar. E-mail: {nlasla, lialsahan, mabdallah}@hbku.edu.qa • Mohamed Younis is with University of Maryland, Baltimore County, Baltimore, MD, USA. Email: younis@umbc.edu Manuscript received ; revised . undermine the network, for instance, to prevent double spending attack and rewriting the block-history [4], [5]. Bounding the capacity of users based on their computation (energy) is only a sufficient condition to prevent security attacks and not necessary. In the literature, there have been several attempts to rationalize the consumed energy in PoW by either bounding the miner economic capacity using alternative more energy-efficient mechanisms [6], [7], [8], or by recycling the wasted energy spent in solving the puzzle to also serve for other useful tasks [9]. However, such rationalization still cannot meet the same security level as the original PoW. Proof-of-Stake (PoS) [6], [10], for instance, is a greener form of distributed consensus where validators (akin to miners) do not have to use their computation power but only proof the ownership of an amount of stake (bond) in order to vote on new blocks. Such an approach suffers from a Nothing-at-Stake problem, where validators can stake for different blocks supporting multiple forks in order to maximize their chances of winning a reward [11]. Some advanced PoS implementations to overcome the Nothing- at-Stake problem, such as Casper [12], are still in the testing stage and not yet deployed in large scale networks. In this paper, we propose a new consensus algorithm that rationalizes the computational overhead of the original PoW and reduces its overall energy consumption to nearly 50% without degrading its security level. The main idea is to factor the power spent during one mining round, in not only electing which node will write the current mining block but also selecting a small subset of miners M′ that will be allotted exclusivity to mine in the next round (power-save round). Therefore, we modify the original mining scheme by defining a new participation rule in a mining race. Unlike the original PoW, the race in the next round will be among only a small subset of miners M′, and thus less energy will arXiv:2007.04086v1 [cs.CR] 8 Jul 2020 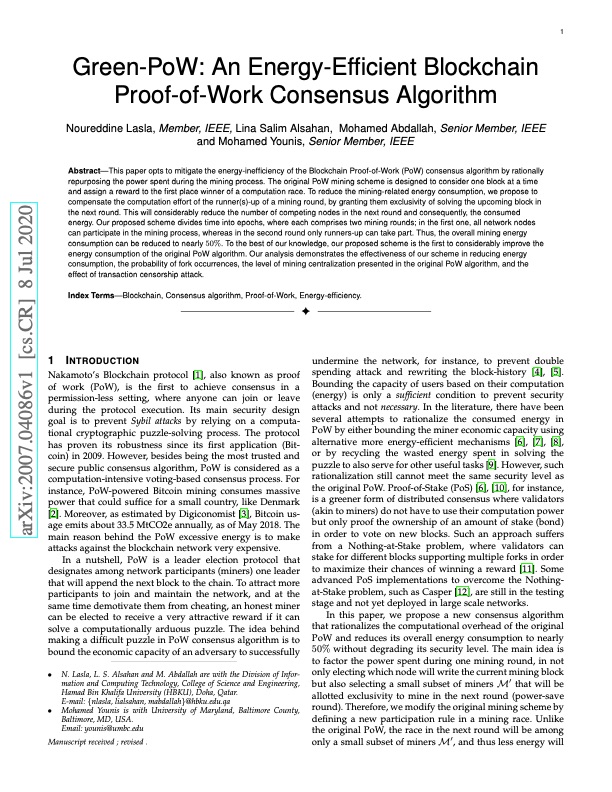