be consumed. The other miners keep waiting until the block gets created before resuming again the mining process. Because only a small subset of miners will participate in a power-save round, it is possible that a deadlock happens if the involved |M′| miners fail to generate the block. This may occur, for instance, if the miners in M′ get disconnected from the network. To ensure liveness and avoid such a situation, we introduce a time-out after each normal race round. If the nodes that are not participating in the mining during a power-save round, do not receive a new block after a specific period of time, they automatically resume the mining in order to create the missing block. The contributions of this paper can be summarized as follow: • In order to reduce the energy consumption in PoW, Green-PoW considers mining rounds in pairs and adjusts the election mechanism during the first min- ing round in the pair, to allow the election of a small subset of miners that will exclusively mine in the second round. Assuming the total network hashing power is equally distributed among miners, a significant energy saving up to 50% could thus be achieved. • Given that only a small subset of miners can partic- ipate in the even-numbered mining rounds, Green- PoW reduces the probability of fork occurrences. Therefore, the total fork occurrence will be con- siderably decreased compared to the original PoW algorithm. • Green-PoW can help in reducing the level of mining centralization presented in PoW. This kind of cen- tralization can happen when a small portion of the miners, e.g., mining pools in the case of Bitcoin, holds the majority of the network hash-rate. In Green-PoW, a winner during the first round cannot participate in the second round mining, thus miners that hold the majority of the network hash-rate will no longer have the same potential for dominating block generation. • We demonstrate the effectiveness of Green-PoW al- gorithm in reducing the overall energy consumption, during mining, by conducting a stochastic analysis where the mining is modeled as a Poisson process. The remaining of this paper is organized as follows. Section 2 reviews the existing work to improve the energy consumption in PoW. Preliminaries about mining in PoW are presented in Section 3. The detailed description of our proposed consensus algorithm can be found in Section 4. Section 5 analyzes the security properties and reports the performance results of Green-PoW. Finally the paper is concluded in Section 7. 2 RELATED WORK In this section, we survey studies made so far in order to mitigate the energy-inefficiency of the PoW algorithm. There are two main categories of solutions. In the first category, the goal is to improve the energy usage of the original PoW by either recycling the power spent during the mining process in serving other useful real problems rather than solving a useless puzzle or modifying the consensus protocol flow while maintaining the cryptographic puzzle element unchanged. On the other hand, the second category follows completely different and consensus algorithms such as Proof of Stake (PoS) [6], Proof of Elapsed Time (PoET) [7], and Proof of Retrievability (PoR) [8]. While this class of solutions can achieve considerable energy saving, yet it cannot reach the same security level as the well tested PoW. Our proposed Green-PoW consensus mechanism can be classified in the first category of solutions, which aims to improve the energy consumption of PoW. Therefore, the focus in this section is on setting Green-PoW apart from competing in such a category. REM [9] replaces the wasted computations in perform- ing the conventional PoW by executing useful workloads outsourced by clients. REM relies on the availability of Software Guard Extensions (SGX) technology at the miners’ infrastructure, where a trusted execution environment is utilized to preserve the integrity and confidentiality of the workload. Miners get rewarded based on the number of instructions they can process successfully. However, REM falls short in overcoming the centralized nature of the SGX attestation process where accessing Intel’s server is mandatory in order to validate clients’ workloads. Unlike REM, A. Shoker [13] and S. King [14] have proposed two distinct schemes that invest the mining effort to solve public problems that do not require confidentiality. Examples of the considered public problems include the generation of large prime numbers and performing complex matrix operations. In both schemes, the difficulty of solving a public problem can be adjusted, which allows it to be an appropriate re- placement for the hashing processes done by the traditional PoW. However, the aforementioned schemes cover only a predefined set of problems which limits the utility of the processed workload. Following a similar approach, Felipe et al. [15] have presented a proof-of-learning consensus mechanism that substitutes the PoW puzzle by machine learning tasks. The goal is to re-purpose the wasted computational power to build a decentralized system for crowd-sourcing machine learning models. In their approach, nodes are classified into suppliers, trainers, and validators. Supplier nodes publish machine learning tasks and provide the training and test- ing data, whereas trainers perform the training work in an attempt to win the block. Validator nodes, which are chosen randomly, are responsible for ranking the published machine learning models based on their performance, then pick the best as proof of the work. By design, the models, testing, and training data are all public and the scheme does not provide any confidentiality guarantees, which makes the usability of such an approach questionable. In order to preserve the privacy of both training and testing data, Qu et al. [16] have considered the use of federated learning. This enabled crowd-sourcing the workload required to train a model while using miner’s local training data. Furthermore, the verification of the model’s accuracy is done using a Ho- momorphic encryption-based verification scheme to prevent the disclosure of testing data to the network. Daian et al. [17] have proposed outsourcing PoW to defeat several frequent cyberattacks such as spam emails and DDoS to recycle the inevitable wasted power. This can be achieved by utilizing the difficulty of solving the 2 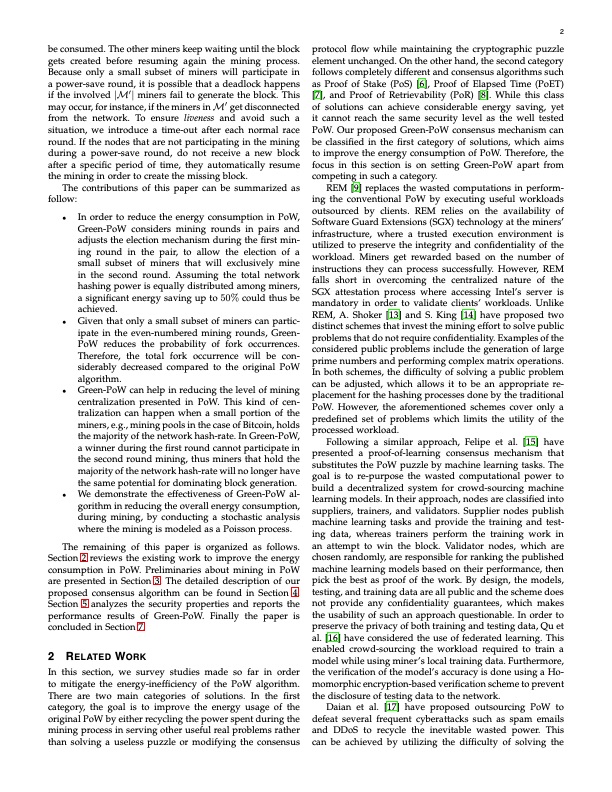