European Association for the Development of Renewable Energies, Environment and Power Quality International Conference on Renewable Energies and Power Quality (ICREPQ’09) Valencia (Spain), 15th to 17th April, 2009 Comparison of R744 and R134a heat transfer coefficients during flow boiling in a horizontal circular smooth tube R. Mastrullo1, A.W. Mauro1, A. Rosato1, G.P. Vanoli2 1 D.E.TE.C., Facoltà di Ingegneria, Università degli Studi di Napoli Federico II, p.le Tecchio 80, 80125 Napoli, Italy, Fax number: +39 (0)81 2390364, E-mail: antonio.rosato@unina.it 2 Dipartimento di Ingegneria, Università degli Studi del Sannio, corso Garibaldi 107, Palazzo dell’Aquila Bosco Lucarelli, 82100 Benevento, Italy Abstract In last and recent years new regulamentations and protocols concerning the environmental impact of refrigerants have led to the research of new environmental friendly refrigerants. In this contest the carbon dioxide (R744) is considered as one of the most promising substitute of the actually most widely used refrigerant in commercial refrigeration: R134a. However, some technical and thermodynamic problems avoid a widespread use of R744 in refrigeration applications. Referring to the performances of R744 in refrigerating applications, they are influenced by the design of components. In order to study the heat transfer characteristics at refrigerant side during flow boiling of R744 and to compare its behaviour to that of R134a, the authors carried out experiments in several working conditions usually encountered in commercial refrigeration. In this work are presented the experimental results of heat transfer coefficients for R744 and a comparison with those for R134a in the whole range of vapour qualities for a heat flux equal to 10 kW/m2 varying the mass flux between 200 and 350 kg/m2s and the saturation temperature between -8.0 °C and +5.0 °C. Key words R134a, R744, heat transfer coefficient, flow-boiling, evaporator, refrigeration. 1. Introduction Over the last decades, the refrigeration, air conditioning and heat pump industry has been forced through major changes caused by restrictions on refrigerants [1]. During last years, new trends in the use of refrigerants established depending on the application field. In several applications of domestic, commercial and industrial refrigeration the largest demand of refrigerant is for R134a [2]. For the future, no restriction in its use is imposed by the actual regulations, with except for the mobile air-conditioning systems. However, there is growing concern about future use of HFC refrigerants due to their impact on climate change. For this reason there is an increasing interest in technology based on ecologically safe natural refrigerants. Among these, carbon dioxide is seen today as one of the most promising refrigerants [3], because it is an ozone friendly, with negligible GWP, non toxic, non flammable fluid, with special thermodynamic and transport properties. Taking into account that the climate change is influenced by energy consumption during the lifetime of refrigerating equipment, the essential option to lower the environmental impact is to improve the energy efficiency of R744 systems. To maximize the performances of a vapor compression plant, a proper design of each component is necessary. Among the components which influence the cycle efficiency, the evaporator is of particular importance. To optimise the design of evaporators, the accurate knowledge of heat transfer coefficients and pressure drops are fundamental. Recently, our research group compared the experimental R744 pressure gradients with those obtained with R134a at similar operating conditions [4]. About the study of R134a flow boiling, several works are available in literature covering different operating conditions. Nevertheless, few papers are available for inner diameters from 5 to 7 mm, a range of diameter largely used in refrigeration. Besides, there is a lack of experimental results for evaporating temperatures lower than 0 °C. A lot of experimental studies have been carried out in recent years to measure the CO2 two-phase heat transfer coefficients during flow boiling. Nevertheless, more accurate local heat transfer data are still needed. In fact, carbon dioxide showed a very https://doi.org/10.24084/repqj07.436 577 RE&PQJ, Vol. 1, No.7, April 2009 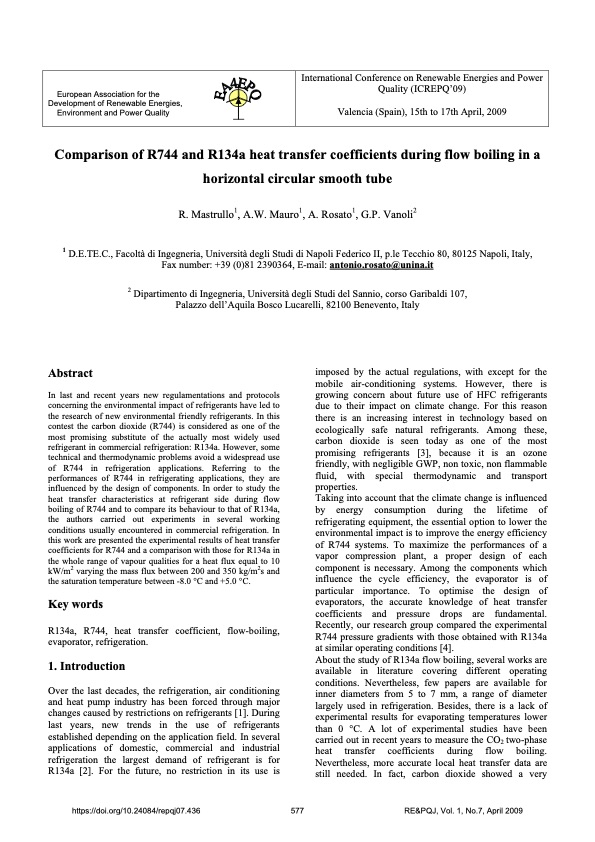