EFF:BHD 3.6 u. s. department of commerce NATIONAL BUREAU OF STANDARDS UASEINGTON 25, D. C. August 6, 1947 GAS TURBINES AND JET PROPULSION INTRODUCTION Letter Circular LCSJ2 (Supersedes LCS32) This circular was prepared as a ready reply to numerous and diverse requests Being received at the National Bureau of Standards for information on gas turbines and jet propulsion. It is intended primarily for the un- initiated, and does not present or refer to certain information in a field which is still subject to restrictions for reasons of military security. However, the principles upon which the gas turbine, the jet engine, and the rocket operate have Been known for many years, and the student of these power plants can Become well advanced Before access to the most recent devel- opments is essential. Such engines as gas turbines, turbo-jets, prop-jets, pulse jets, ram jets and rockets are now practical power plants, even though their respective fields of application may not completely established. The primary purpose of this circular is to assemble references to published sources of information, from which the reader may select articles on topics of specific interest. Since several hundred references are included, they have been grouped for convenience in accordance with the subjects treated. As an aid to the reader in his use of the bibliography, a brief discussion of terms and fields of application is included. CLASSIFICATION OF RECENT POWER PLANTS Because rockets carry not only fuel, but also some other substance which reacts with, or causes the decomposition of the fuel, with the evolution of a large volume of hot gas, the rocket power plant falls logically in a class by •itself. The rocket is distinguished by its self-sufficiency, making it the only type capable of operation outside the earth's atmosphere, and by the fact that its jet normally has a higher temperature and velocity than that of other jet engines. The erroneous view is rather prevalent among beginning students that some sort of "push" on surrounding air is required for jet propulsion. It is emphasized that such a view has been proved incorrect by experiment. The presence of air around the unit does have the usual effect of offering a resistance, which is known as drag, to the movement of the body. Air also has important effects upon the stream of ejected gas after it has left the unit. This action alters the shape of the jet and the time in which it is brought to rest relative to the surrounding air, but it is without effect upon the thrust developed by the rocket motor. 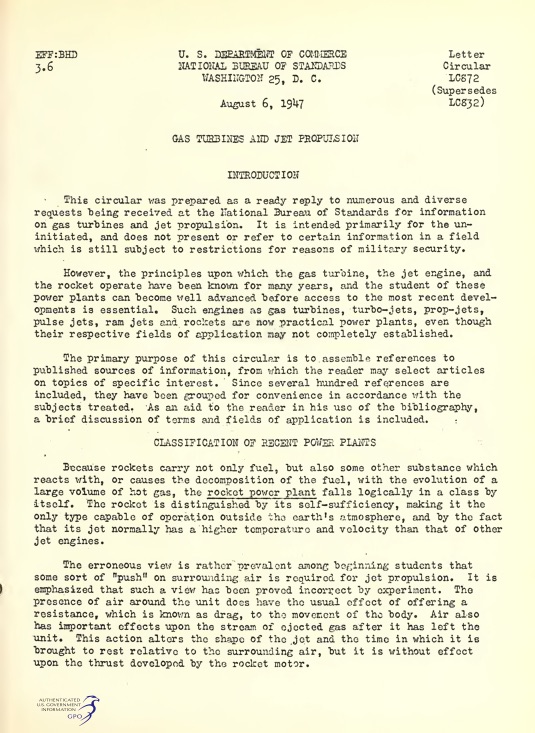