Mathematics 2021, 9, 33 3 of 31 Mistry et al. [23] carried out an entropy generation analysis of desalination technolo- gies, including multiple effect distillation, HDH, reverse osmosis, mechanical vapour compression, membrane distillation, and multistage flash, and also presented [24] the effect of entropy generation rate on the performance indicators, i.e., gained output ratio, of HDH desalination cycles. In summary, the authors in reference work [24] has reported that for any given cycle, there is a specific mass flow rate ratio that simultaneously mini- mizes the entropy generation rate and maximizes the gained-output-ratio; in other words, it corresponds that the minimization of specific irreversibility leads to peak performance. Sharqaw et al. [25] presented the exergy calculations of seawater with applications in desalination systems and reported that the ideal mixture models give flow exergy values that are far from the actual ones and the exergetic efficiency can differ by 80% for some cases, and in another article, Sharqaw et al. [26] also presented the optimum thermal design of such desalination systems and reported that the optimum mass flow rate ratio is always greater than unity, as increasing the effectiveness of the humidifier and dehumidifier increases the recovery ratio almost linearly, and the higher maximum temperature can yield a higher gained-output-ratio. Some authors like Khalifa et al. [27] carried out experimental and theoretical research on water desalination using a direct contact membrane distillation. The authors developed an analytical model based on heat and mass transfer equations and utilized it to predict the temperature difference across the membrane surfaces and then calculating the vapour pressure difference leading to the permeate flux. It was noted that the productivity of the system is very promising since a permeate flux of 100 kg/m2·h was achieved at 90 ◦C for hot feed side and 5 ◦C for cold side steam. Several researchers also carried out investigations to integrate the desalination unit with thermal energy storage. In this case, Summers et al. [28] proposed the design and op- timization of an air heating solar collector with phase changing material integrated with an HDH desalination plant. A two-dimensional transient finite element method was de- veloped, and it was reported that a layer of phase-changing material of 8 cm below the absorber plate is sufficient to produce a consistent output temperature yielding a thermal efficiency of 35%. Moreover, the phase changing material can produce consistent air outlet temperature throughout the day or night. Several other researchers integrated the desalination unit with other types of energy systems. In a work of Sulaiman et al. [29], the authors integrated the desalination plant with a parabolic trough solar air collector and evaluated two configurations of open-water open-air desalination units with collector installed before the humidifier or between the humidifier and dehumidifier. It was reported that the second configuration with the collector between the humidifier and the dehumidifier has much more advantages than the other configuration. Whereas the gained-output-ratio of the first and second configuration were 1.5 and 4.7, respectively. In a work of Lawal et al. [30], the authors integrated the HDH desalination system with a heat pump and concluded that the maximum gain-output-ratio of 8.88 and 7.63 is obtained at 80% components effectiveness using a mass flow rate ratio of 0.63 and 1.3 for modified air heated and water heated cycle, respectively. Gabrielli and Mazzotti [31] presented a solar-driven HDH process for water desalina- tion analyzed and optimized via an equilibrium theory and concluded it as an immediate tool for easily determining the optimal system operation. Gabra et al. [32] presented the mathematical models for the components constructed using CARNOT toolbox in a MAT- LAB environment and the results have shown that FOPID (fractional-proportional–integral– derivative) controlled offers a superior dynamic and static performance and reported that it can be automatically adjusted to compensate the weather changes. As noted, significant research has been conducted on solar-assisted HDH desalination systems focusing on various design improvements with an objective to enhance the ther- moeconomics of the system. One of the works in the performance and cost-effectiveness of a solar-driven humidification-dehumidification desalination system is presented by Zubair et al. [33] in which the capital cost. including supply well, equipment costs, 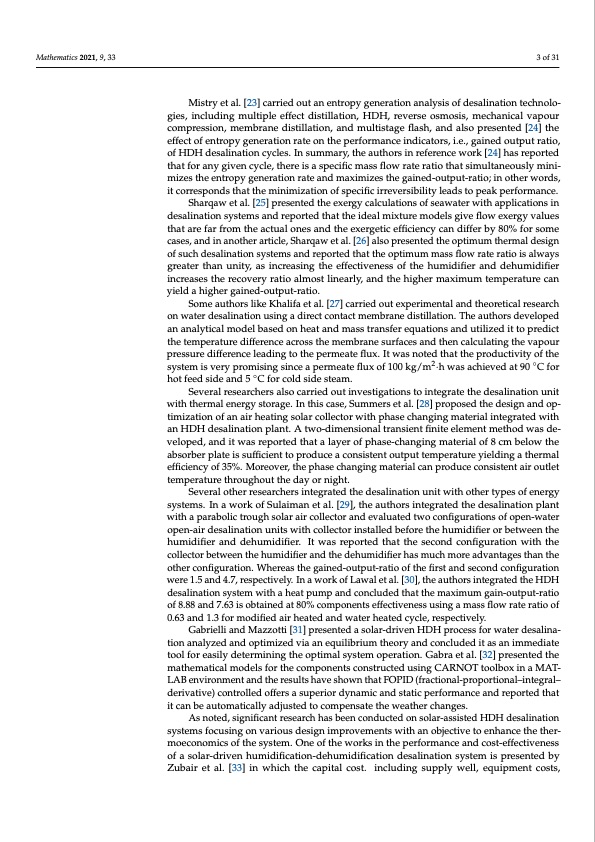